JUST ONE YEAR IS LIVE!

The beginning of my sophomore year in college was off to a rough start.

On the first day of orientation, I had an altercation with an infuriating British dude in a campus bathroom.

I got home later that night and realized that the foreign student we were expecting to rent a room in my parents’ house was allergic to our cat.

So, the spare room went to someone else: Caleb—the British guy from the men’s room.

And so it began…my love-hate story with Caleb Yates. Or was it hate-love in that order?

The guy knew how to push every one of my buttons.

Sometimes I’d email him to express my aggravation and disdain.

He’d actually rewrite my own words and send them back to me.

That was the type of infuriating person Caleb was.

He eventually grew on me, and Caleb soon became one of my best friends that year.

Too bad he was headed back to England soon, so nothing could happen between us—for so many reasons.

I definitely couldn't fall in love with him, especially since all we had was just one year.

Penelope Ward has given us a slow burn romance that makes you devour it all at one time.  We often think love comes with older people but Caleb and Teagan shows us that love can happen at anytime.

Caleb is an exchange student from London and only has one year to be at Northern.  He has no ties and he doesn't want to open himself up to fall for someone that he will have to leave.  When you heart wants what it wants at times you seem to forget what the goal is.

Teagan is funny. Everything she does makes you laugh to the point of picturing who she is.  Let's just be honest, she's a nerd. She's somewhat creepy but she's cute.  Her first run in with Caleb is during orientation.  They were not cordial and Caleb has a way about him.  Little does she know, they will soon be closer than ever.

There are things that we learn about both of them and it makes you understand why they are the way they are.  Caleb is very intrigued with Teagan but is he truly ready for the ride he is getting on? Is this year going to be enough for both of them?

She grew up in Boston with five older brothers and spent most of her twenties as a television news anchor. Penelope resides in Rhode Island with her husband, son, and beautiful daughter with autism.

With over two million books sold, she is a 21-time New York Times bestseller and the author of over twenty novels. Her books have been translated into over a dozen languages and can be found in bookstores around the world.


Posted by Crazy, Chaotic Book Babes at 1:00 PM No comments: 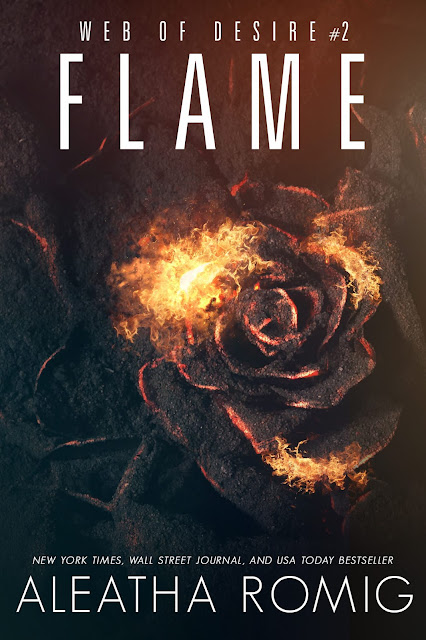 From New York Times bestselling author Aleatha Romig comes a brand-new dark romance, Spark, set in the same dangerous world as Secrets and Twisted. You do not need to read the Web of Sin or Tangled Web trilogy to get caught up in this new and intriguing saga, Web of Desire.

“What matters most is how you walk through the fire.” ~ Charles Bukowski

No longer simmering and crackling beyond our realm, the fire smoldering in the distance roars to life. The blaze has the capacity to scorch and destroy everything and everyone in its path.

All that I’ve known and believed was obliterated the moment Madeline spoke a truth I’d never suspected. With one sentence, one plea, my life has taken an uncharted turn. Through the smoke and soot, I search for answers.
A man, an outfit, and my brothers-in-arms have been my solace, my calling, and my reason to live. Now that I know there’s more, what will the future hold?

The Ivanov bratva wants Chicago. I want what they possess. With the Sparrow world at war, and Madeline’s declaration, she and I are surrounded, trapped by the inferno.


What will remain when the flames cease and we are left surveying the ashes?

Is there anything Aleatha Romig can't do? I mean seriously this book was everything and more.  Flame is the second book in the Web of Desire series and we get to learn more abut Madeline.

Madeline's story answers some questions that you may have had after ready book one but I still want to know what really happened with Patrick.  There are somethings that are still missing and will still leave you on the edge of your seat. We love to see the alpha men in the story but there is something about Madeline that shows her will, her strength and the determination she has.

There is so much more to this story and I can't wait to see what happens next. Aleatha can mesmerize anyone with her stories.  The road she takes you on leaves you wanting more and the cliffhangers will not disappoint but only make you long for more! 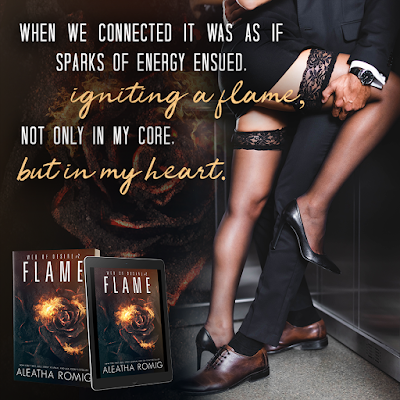 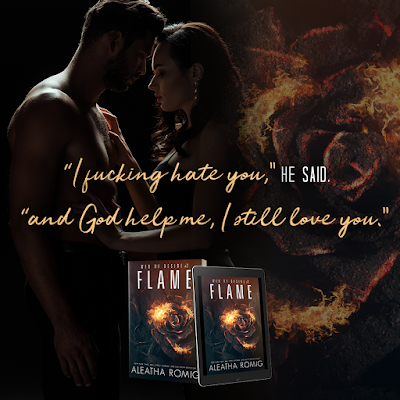 Check out the series:
https://www.aleatharomig.com/web-of-desire

Aleatha Romig is a New York Times, Wall Street Journal, and USA Today bestselling author who lives in Indiana, USA. She grew up in Mishawaka, graduated from Indiana University, and is currently living south of Indianapolis. Aleatha has raised three children with her high school sweetheart and husband of over thirty years. Before she became a full-time author, she worked days as a dental hygienist and spent her nights writing. Now, when she's not imagining mind-blowing twists and turns, she likes to spend her time a with her family and friends. Her other pastimes include reading and creating heroes/anti-heroes who haunt your dreams and bring your imagination to life!
Aleatha released her first novel, CONSEQUENCES, in August of 2011. CONSEQUENCES became a bestselling series with five novels and two companions released from 2011 through 2015. The compelling and epic story of Anthony and Claire Rawlings has graced more than half a million e-readers. Aleatha released the first of her series TALES FROM THE DARK SIDE, INSIDIOUS, in the fall of 2014. These stand alone thrillers continue Aleatha's twisted style with an increase in heat.
In the fall of 2015, Aleatha moved head first into the world of dark romantic suspense with the release of BETRAYAL, the first of her
five novel INFIDELITY series that has taken the reading world by storm. She also began her traditional publishing career with Thomas and Mercer. Her books INTO THE LIGHT and AWAY FROM THE DARK were published through this mystery/thriller publisher in 2016.
In the spring of 2017, Aleatha released her first stand-alone, fun, and sexy romantic comedy with PLUS ONE, followed by the sweet stand-alone, ONE NIGHT.
Aleatha is a "Published Author's Network" member of the Romance Writers of America and PEN America. She is represented by Kevan Lyon of Marsal Lyon Literary Agency.
Get Aleatha'd Here:
Newsletter | Website | Facebook | Amazon Author Page | Goodreads | Instagram | Twitter | Pinterest

Posted by Crazy, Chaotic Book Babes at 9:30 AM No comments:

4 Star Review// It Was Always You by Erika Kelly


He’s the bad boy quarterback, one scandal away from being traded.


She’s the squeaky-clean pop star with a morality clause hanging around her neck.


And they can’t keep their hands off each other.


Cassian Ellis fell in love with Gigi Cavanaugh when he was fourteen. But he couldn’t have her. His mentor — her dad — promised to take him out of detention and all the way to the pros. The price: stay away from his daughter.


But Gigi was embedded in his soul — there was no distancing himself from her. And, senior year in high school, in a moment of desperation when he couldn’t take all the want and love and lust, he ended things in the worst way possible.


And guess who’s working right alongside him?


Gigi can't believe her bad luck. She's on the same Dreams Come True tour as Cassian Ellis. And, with the press recording their every move, she has to pretend to like the man who tore out her heart and stomped all over it.


But Cassian couldn’t be happier since he never stopped loving her. And he’s determined to win her back. Only, someone’s leaking photographs, and headlines about the bad boy quarterback corrupting the squeaky-clean pop star could sink both their dreams.


Can their love overcome all the world has put between them?


Get Your Copy Here: 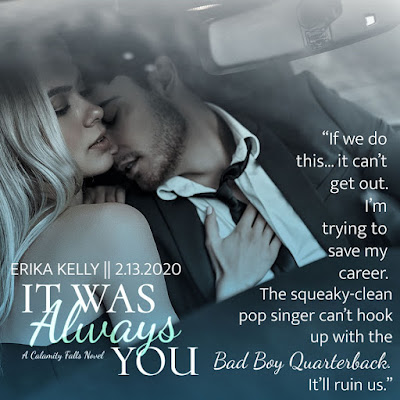 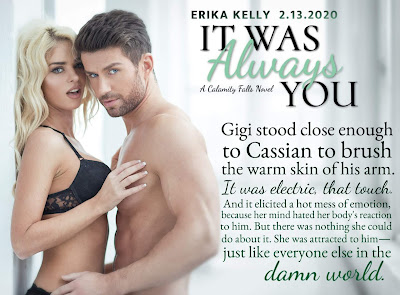 4 Star Review//
If there is one thing Erika Kelly writes well, it's rockstar romances. This is just that with a hint of sports thrown in.

While I very much enjoyed this book, it's not my absolute favorite Erika Kelly book but a close third!

Gigi and Cassian have a past, that much is clear. Cassian has some deep rooted issues that give him a broody but dominating character. Gigi is strength, sweetness and just the perfect sass that I felt myself relate to her instantly.

Erika Kelly has a way to make words flow where you don't want to put the book down. You consume it because it consumes you with the emotions of love, sadness, happiness, and so much more in between. I wish the past wasn't dwelled on so much by Cassian but otherwise I enjoyed this second chance romance.

I love this series. It's one of my faves and I can't wait to see what Erika Kelly will bring us next. 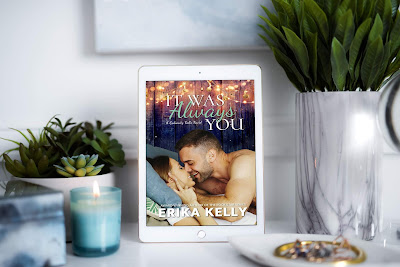 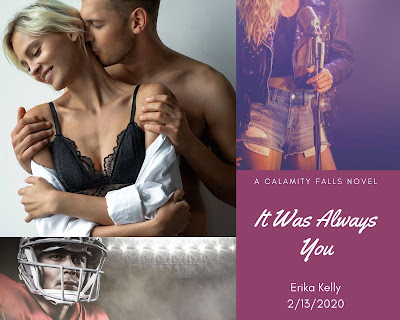 Award-winning author Erika Kelly has been spinning romantic tales all her life--she just didn't know it. Raised on the classics, she didn't discover romantic fiction until later in life. From that moment on, she's been devouring the genre and has found her true voice as an author. Over three decades she's written poems, screenplays, plays, short stories, and all kinds of women's fiction novels. Married to the love of her life and raising four children, she lives in the northeast, drinks a lot of tea, and is always waiting for her cats to get off her keyboard.

Posted by Crazy, Chaotic Book Babes at 10:00 AM No comments:

Thinking of booking a tour?

Blogs to check out~

Get our UPDATES in your email~